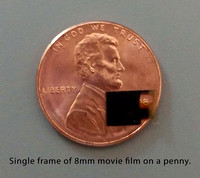 I can scan your 8 and Super 8mm silent movies to MP4 files you can watch on a computer or modern television. I am offering this service for people who do not want to risk mailing their heirloom movies off. Below is a video I shot on an antique Kodak Brownie movie camera in the early '80s. You may say, Jason, that's not very good, and I would not argue with you, that is why I am showing it to you. As I said, the camera was made in 1955, I used it 25 years later. I also did not take the best care of the film. Also keep in mind that today we are used to 1080p to 4k movies at 30 frames a second, those 8mm movies were shot on a piece of film the size of a pencil eraser, (see photo of a single frame on a penny.) and at 16 frames a second. There was no focus or light meter you just guessed. So with all that said, I actually am pretty pleased with the result. If you or your parents had a better camera and the film was properly developed and kept I would guess your results would be better.

I always aim for my clients to have access to the very best possible as with the museum-grade prints I make in-house. I also offer more normal quality work too at a good value, this is a good value. I do want you to know however that on the West Coast there are companies that can do very good forensic restoration quality but it will cost you about 5 times more and you will have to send your film off. They use equipment that costs more than my house and of course, know how to use it.
All that being said I charge $20 per 50 feet of 8mm or super 8 that is one of the 3-inch reels. I have been handling film my whole life and will be very careful with your film. Of course, I can not be responsible for any damage though. Film can become brittle with age and splices can break. As aways, feel free to mail me at [email protected]