Growing up in the South 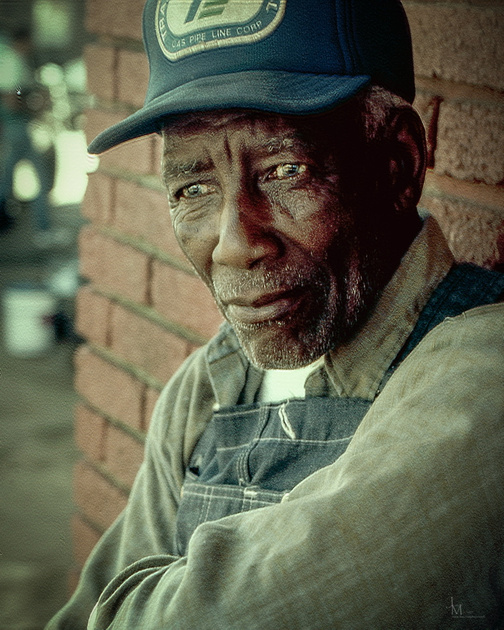 Bodie Fortson was descended from slaves, at least that is what I was remember being told as a child. After viewing the Sally Mann photography show at the High Museum of Art last weekend I again thought about what it was like for me, a white male, growing up in the late 50-’60s.
I guess he actually could have been the son of a slave given that Georgians back then didn’t seem big on obeying laws regarding slavery. I read the last slaving ship dropped its cargo in Jekyll Island in 1858. That was 50 years after it was illegal and 8 years after what I now call the “Studio House” was built. The few things I remember half a century later: Bodie and his wife Roxie lived next door in a shack with a dirt floor with a coal heater in the center. My mother would let me walk across the field to visit them. I had a pocket watch and was learning to tell time; I loved visiting and I would change the time on my watch so I could stay longer. I do not have any specific recollection other than I knew that I observed to always be kind to them. I recall he called me Master Jason. Now, the sound of that makes me a little sick to my stomach but I always understood it to be a salutation like Mister or Misses, as I would get letters addressed to Master Jason Machen, and white shop owners would also address me that way. I always said Sir and Mam to Bodie and his wife. I don’t know when Bodie and Roxie moved, I think I thought it was to someplace better. Later the child of the farmer who owned the land would put a house there.
As an adult, I would see Bodie, who now lived in a house not much better but at least it had a floor, in the city of Bowman standing on the street corner propped on his walking stick giving a welcoming smile to people he knew. By this time I had become extremely shy. It took all the courage I could muster to ask him if I could make this photograph using my Sears SLR and Kodachrome slide film. I think this would have been around the Bicentennial. I may have shot it for a contest I entered called a day in the life of America. From time to time I would awkwardly try to give Bodie and Roxie some things as my beginning family could spare.