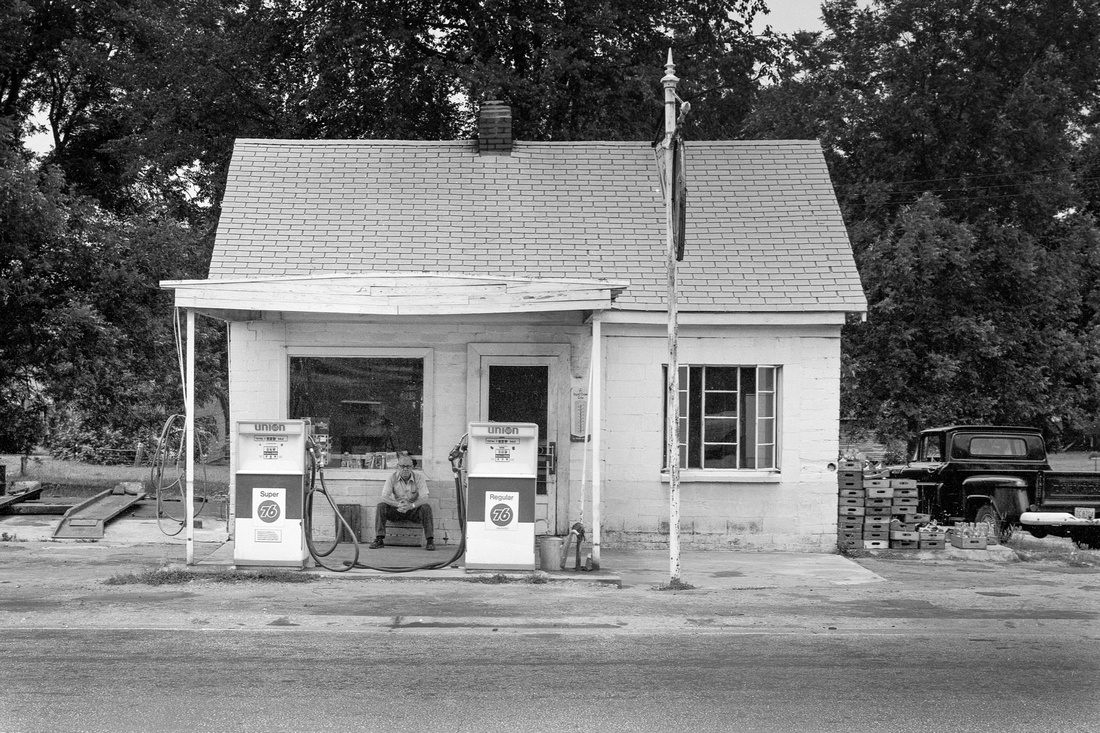 Hoyt's Service Station
Bowman, GA late '70s
"Fill'er up? Yes Boss Man" was what I always heard pulling up here, growing up in the rural south. He would greet me as young master Jason. My mother had to explain this archaic greeting to me. My parents were addressed as Mr. James and Miss Vivian. "Three dollars worth and a plug of Day's Work [chewing tobacco]," my dad would say, or if my mom, "Three dollars worth and a pack of Pall Mall, could you check the water?" Everyone knew that if he did not have a customer or was not changing the oil in a vehicle you would likely find Hoyt Witcher sitting on a wooden Coca-Cola crate just like in this picture, likely dozing in the afternoon sun. Everyone sat on Coca-Cola crates to share the latest gossip. You needed to know how to balance on the crate and to chew your tobacco between comments, or if a child like me you needed to learn how to pour peanuts into the narrow neck of the Coca-Cola that you just pulled from deep inside the icebox. Hoyt must have had a good sense of humor he was always laughing. If you got a toy for Christmas that needed batteries Hoyt's was the only place you were going to find them on Christmas day or Sunday afternoon. One thing that is burned into the memory of neurotic little Jason's mind is Hoyt's was also where you would buy ice to make ice cream. He used to have an ice house containing big blocks of ice and when he would throw one of those blocks into the machine that would rip the blocks into smaller pieces I just knew it was going to rip his arm off every time. I was amazed at how ignorant of danger most adults were.
Museum-grade signed & numbered prints available.
Mamiya RB67 Kodak Verichrome Pan film.